Motorcycle riding and commuter groups recently cried foul over the ban on sub-400cc motorcycles on Osmeña Highway which began last July 22, claiming that the move is another form of discrimination against the masses.

Angkas Head for Regulatory and Public Affairs George Royeca slammed the prohibition of small motorcycles on the highway, saying that the ban is not only anti-motorcycle-rider, it is also anti-poor.

With the ban, motorcycles whose engine displacement is below 400cc and which are coming from the East Service Road (Taguig City) can no longer use the northbound portion of Osmeña Highway starting from Sales Bridge (Pasay City). Instead of directly heading straight to Osmeña Highway via a small road connector that crosses the PNR track, the small motorcycles must divert to Pasong Tamo Extension going to their destination in Pasay, Makati, or Manila.

Royeca said that the ban will affect a lot of commuters that rely on these critical roads. He stated that their Angkas biker-partners will have to do detours into roads that are usually jampacked with vehicles, forcing them to go through heavy traffic. 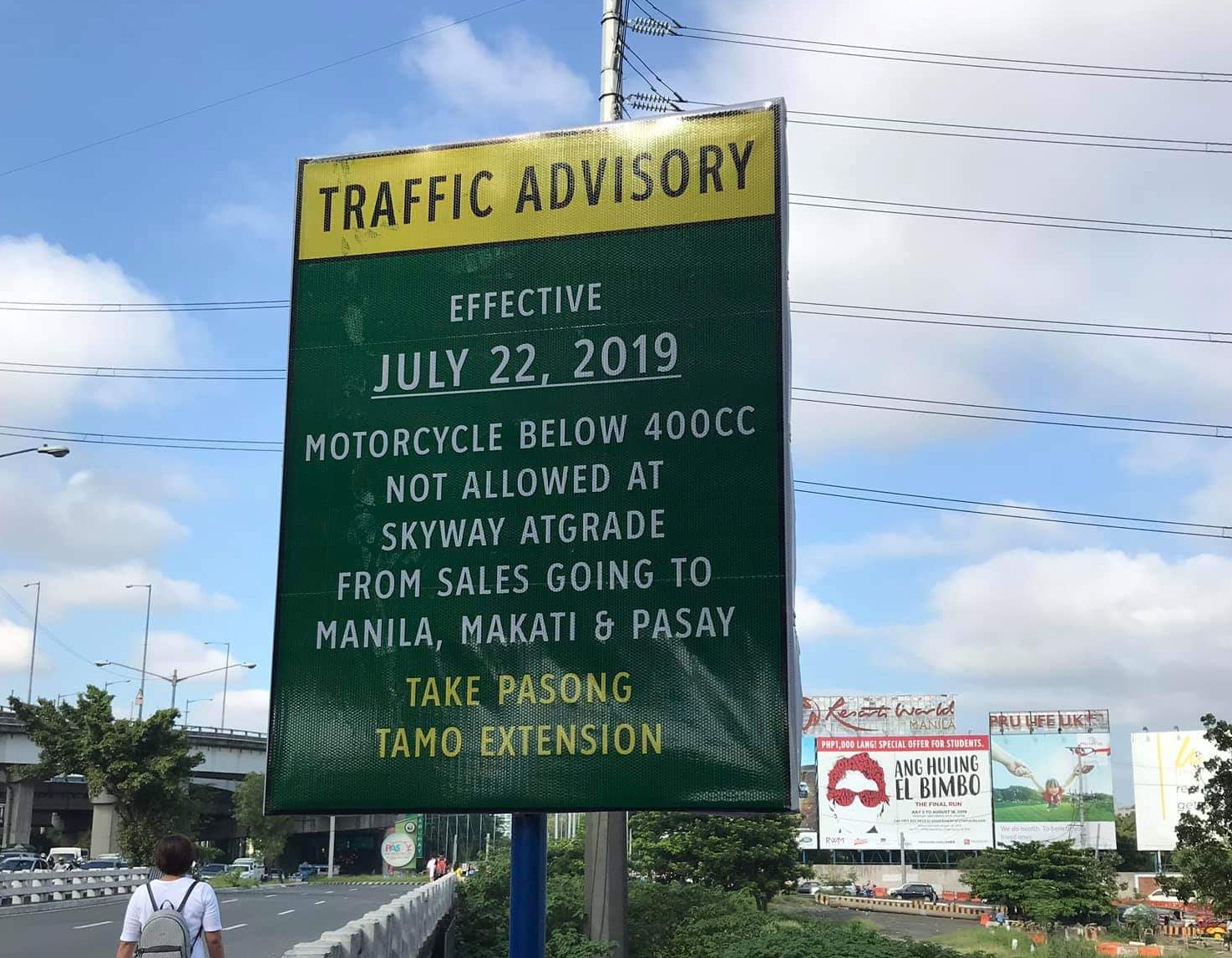 “What’s worse is that the ban also affects commuters who will have to go the longer way, resulting in a longer travel time and higher fares because of the detours,” Royeca noted. “The move is therefore also anti-commuter,” he added.

He also pointed to Skyway O&M as the one responsible for the ban. Skyway O&M is a private corporation designated by the Toll Regulatory Board (TRB) to operate and maintain tolled roads under the South Metro Manila Skyway Project (SMMS).

However, he stressed that Osmeña Highway is not a tolled road and, as such, is excluded from the list of expressways where sub-400cc motorcycles are banned. “Osmeña Highway, therefore, cannot be covered by the TRB,” he claimed.

Furthermore, he also asked where the official order from the TRB is. “Why is it that only Skyway O&M Corporation is giving the order? “Can a private corporation now dictate the use of public roads and facilities? No private corporation has the right to dictate the use of public roads,” he added, emphasizing that the ban was implemented without any studies or consultation with stakeholders.

According to Angkas Operations Manager David Medrana, there are currently over 27,000 Angkas riders, most of whom are based in Metro Manila. These riders use motorcycles whose engine displacements range from 100cc to 200cc. “There are only very few motorcycle riders in Metro Manila who have 400cc motorcycles. This ban is clearly discriminatory,” Medrana claimed.

Meanwhile, Jobert Bolaños of the Motorcycle RIghts Organization (MRO) also denounced the ban, saying that it is anti-poor. “The ban will benefit only moneyed individuals who can afford big, expensive motorcycles and four-wheeled vehicles, while displacing those that only have small, sub-400cc bikes,” Bolaños said. “This is unfair and clearly one-sided,” he added.

For his part, Atty. Ariel Inton, former LTFRB board member and current member of the Lawyers for Commuter Safety and Protection, echoed the others’ sentiments. “That long stretch of the Osmeña Highway is a critical thoroughfare leading to key areas like Manila, Makati, Pasay City, and Taguig and banning small motorcycles there will greatly be an inconvenience to commuters who use motorcycle taxis daily,” Inton claimed. “Since that long stretch of Osmeña Highway is not tolled, it should be open to all motorists regardless of vehicle type,” he added.

Motorcycle clubs are currently planning to stage unity rides and protests in the coming weeks to push for the lifting of the ban.