Over 30,000 Angkas bikers have painted the EDSA White Plains blue as they gathered yesterday to rally against the newest provision of the Land Transportation Franchising and Regulatory Board (LTFRB) to limit the number of riders per motorcycle taxi company.

Coming out in droves to do a “Unity Gathering” to express their dissent against the new government provision, the Angkas bikers decry the newest government policy requiring over 17,000 of their colleagues in Angkas to lose their jobs. 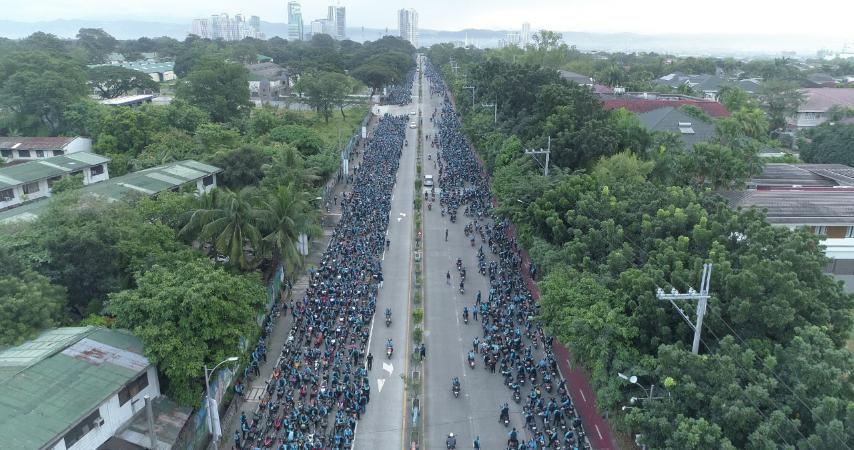 Upon the recommendation of the ‘new’ Technical Working Group (TWG) composed of representatives from government agencies–excluding original civil society members and transport experts and advocates–the LTFRB passed a directive to put a cap of 10,000 riders per motorcycle taxi company participating in the test run extension which will start in January.

Angkas, the lone participant in the original six-month test run, currently has 27,000 biker-partners. The LTFRB provision will thus displace thousands of Angkas riders at the start of the year. 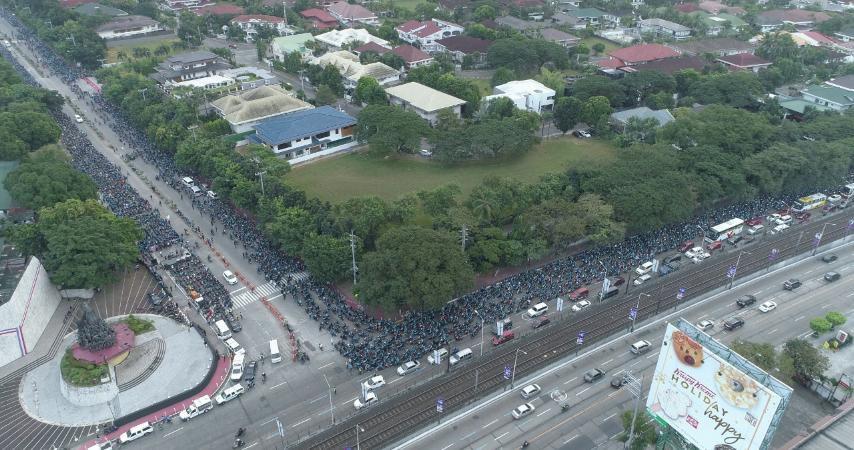 According to Royeca, instead of allowing them to onboard more bikers and serve more commuters, the LTFRB now wants to trim their fleet from 27,000 to 10,000. “That’s a compromise to the quality of service you can expect, and a direct blow to over 17,000 Filipino families,” he stressed. “The traffic in our thoroughfares is getting heavier each day and there are more and more commuters to serve as time goes by. So, bakit kailangang bawasan at tanggalan ng trabaho ang mga bikers natin?” Royeca noted. “Bakit kailangang parusahan ang mga bikers na nakapag-training at napatunayan na ang galing sa daan?”

“It took several TWG meetings and almost six months including many Congress and Senate hearings for Angkas to be evaluated, while this TWG evaluated the new players in less than one month. How is that possible? Why was it rushed?” Royeca added.

In a strong message to government regulators, Royeca stated, “This isn’t competition. In fact, it is anti-competition to force our bikers to leave by regulation. That is not regulation, but corruption.” He added, “Why was the decision-making process not transparent? Why was it done in secrecy? May tinatago ba kayo?” 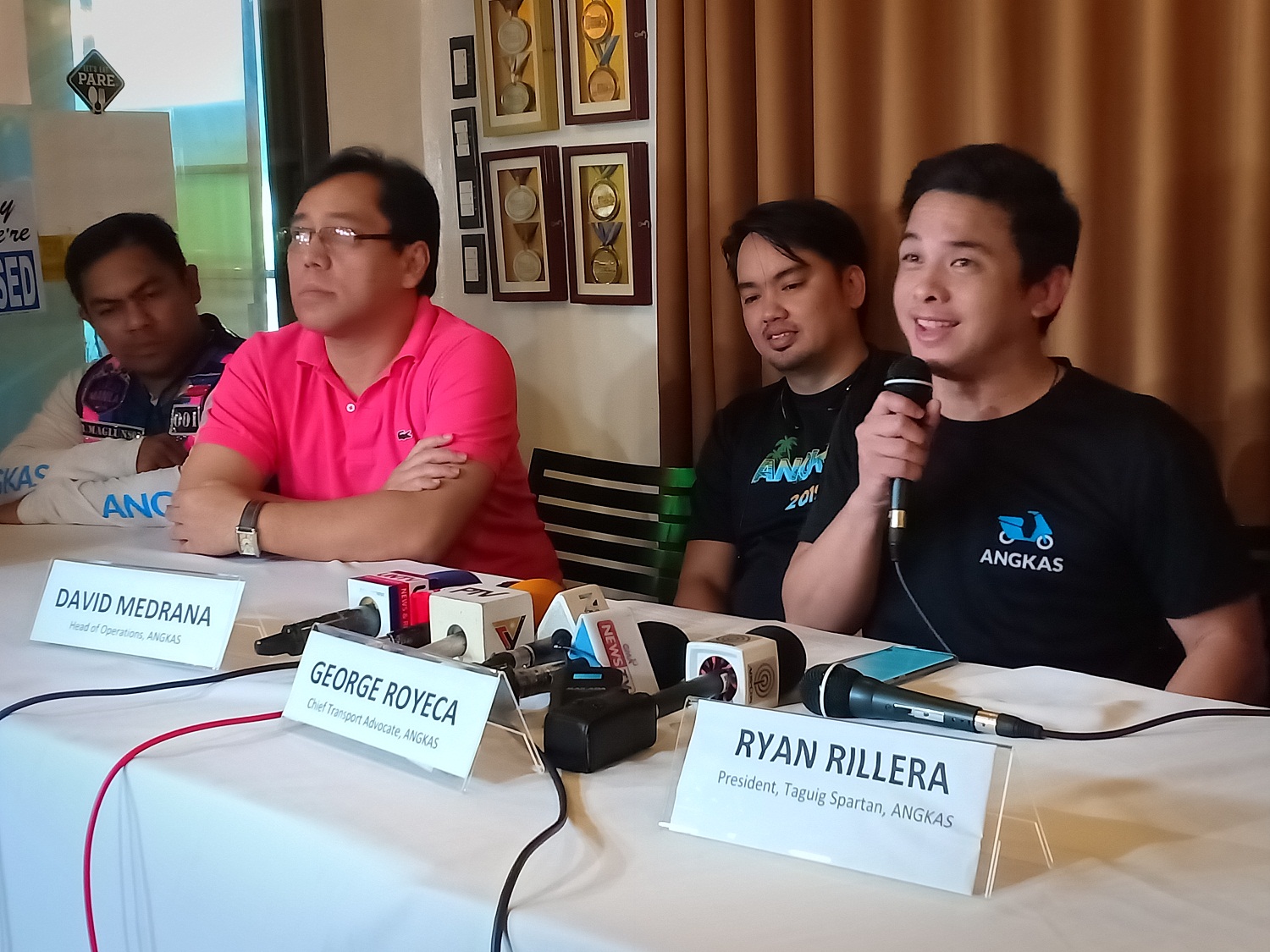 Several lawmakers also chimed in and called out the LTFRB on the new provisions, particularly the cap on the number of biker-partners for motorcycle taxi companies.

Senator Grace Poe, chair of the Senate Committee on Public Services, wanted greater transparency in the process by which the TWG and the LTFRB arrived at their decisions regarding the test run extension and the new provisions.

Sen. Ralph Recto, in turn, said that, “By all means—in the interest of competition, and in the spirit of may-the-best-service-provider-with principle—open up the motorcycle-taxi-ride-hailing service to new players,” the senator stressed. “But this should not be at the expense of firing those already in the business, those who have invested their life savings in motorcycles, those who have logged safety records, those who have cultivated sukis who rely on them for their daily ride,” he added.

Meanwhile, QC Rep. Cristal Bagatsing called on the DOTr to review their stand. “While we support competition and the extension of the Motor Taxi Pilot Implementation, we also believe that there should have been transparency in choosing these two new companies,” Bagatsing stressed. “We need more competition so that the riding public can have more choices, but new players should go through the right process, which includes going through House and Senate scrutiny,” she added.

Former senator JV Ejercito, for his part, issued a statement in his social media page supporting the said firm, saying, “While we wait for the modern railways to become a reality, Angkas is a viable alternative transport. Would rather have the 27K under the system than return to Habal-habal.”

After LTFRB’s announcement of the test run’s extension, addition of two new players, and the capping of the number of riders, Angkas submitted an appeal to the head of the new TWG Antonio N. Gardiola Jr., citing critical safety concerns that may endanger the commuting public. The appeal cited several problematic provisions in the new LTFRB ruling, which included the arbitrary cap of 30,000 bikers for Metro Manila and 9,000 bikers for Metro Cebu, split evenly among three motorcycle companies, including Angkas.

The appeal noted, “Other players should be allowed, but must ramp up at a more steady pace until they can properly prove both their operational teams and app platforms are truly functional at scale. Angkas took three years to learn how to manage 27,000 bikers, yet the new players are expected to handle 10,000 in three months.”

The appeal also stated that the TWG omitted several Angkas proposals, such as requiring participating companies to have dedicated Emergency Response Teams with proper qualifications. “Angkas’ own 24/7 team has 48 members guarantees a response of 20 minutes to any location in Metro Manila and Cebu,” the appeal stated, emphasizing that the Angkas response team members underwent a week-long course certified by a member of the Philippine College of Emergency Medicine and a veteran emergency response trainer with certifications from official medical organizations.

It may be noted that last week, original TWG members issued a statement decrying the new TWG’s move to meet and decide on the motorcycle taxi test run without involving or consulting them.